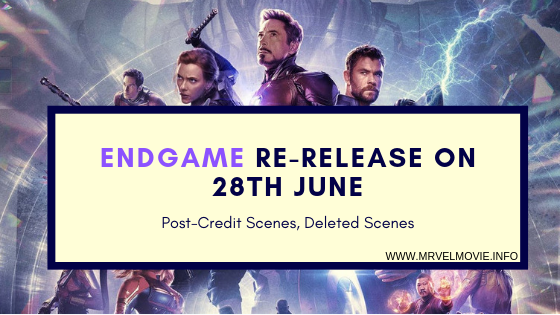 Movie is already of 3 hour and now going to release with deleted scenes which will increase time duration of movie approximate to 3:30 hour.

But Question is that why marvel is going to re-release endgame After 1 Month.

Endgame was a legitimate challenger to Avatar’s all-time worldwide record of $2.788 billion, but ultimately fell short of passing it due to the competitive summer movie season. Would-be tentpoles like Dark Phoenix and Men in Black: International may have bombed, but they still took away screens and repeat viewings from Endgame. It would appear the only way Endgame could potentially beat Avatar is if it gets a re-release, and that is in the cards.

In Simple Words, Marvel want to become no.1 in worldwide and they can do anything for that and today marvel prove that by announcing re-release of avengers endgame